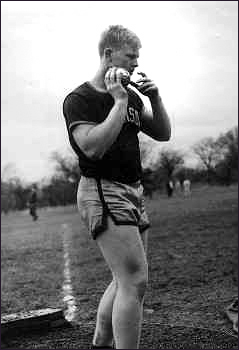 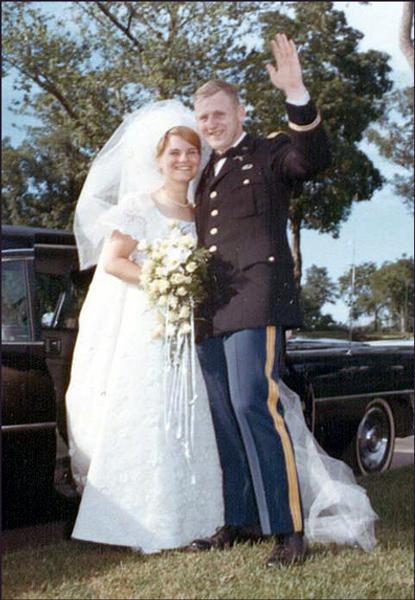 Richard W. Thompson was born in Atchison, Kansas, on 10 March 1941. He graduated from Atchison High School in 1959 where he was a star football player and was first team in all ratings: All League, Northeast Kansas, and All State. He was second in the state in discus and shot-put. Scholastically he was third in his graduating class. He had congressional appointments to both the Military Academy and the Naval Academy, plus academic and

athletic scholarships to 30 other schools. He chose to go to Kansas University on a full athletic scholarship. At the end of his first year he enlisted in the U.S. Army Reserve. He received his training at Fort Leonard Wood and at Fort Dix. After another semester at Kansas University, he entered St. Benedict’s College in Atchison where he made a straight 4.0 average. In the Spring of 1962 he was appointed to the Academy as a result of a competitive Army Reserve examination.

“A Legend in His Own Time!!’’—How many times have you heard that phrase? Well, it must have been quite a few. It is a trite, often used, and really quite ambiguous saying. And it is presented as an

attribute to many people.

But this is supposed to be an obituary for Richard W. Thompson, First Lieutenant, U.S. Army, Infantry, 173d Airborne…, ad infinitum until every imaginable Service unit is mentioned. But the

words abate in significance when followed by that honorable footnote, “(KIA)”—Killed in Action. And yet, the combination of name, position, and footnote mean little, because I doubt if many people know who Richard W. Thompson was, unless someone happened to pencil in one short word— “Buck.”

Believe me, that one word makes a difference. I roomed with him for a month before 1 knew that Buck’s given name was Richard, although I knew of Buck Thompson long before I ever met him. He

may not have been a true legend. It is quite conceivable that the honorable residents of Paris, Texas, may never have heard of him; nor the stalwart citizens of Ogden, Utah; but he did not know them

either, so it is of little consequence. But you can be sure that those chosen few who resided on the USMA Reservation from 1962 through 1966 heard of him.

What I am trying to say is that Buck was a legend in his own right. In the humble beginnings of struggling Fourth Class year he evoked feelings of levity among his contemporaries, and some degree

of consternation concerning his ability to survive. At the same time, Buck’s superiors seemed to view the antics of this young man with mixed emotions, ranging from humorous indifference to utter

disbelief. Still, though, Buck was known.

By the time he reached the beginning of Third Class academic year, he was already an official member of the elected aristocracy of the Class of 1966. So, while the comportment of the individual

continued to upset many of the towers of traditional behavior, the institutional legend of Buck Thompson expanded more and more. For, Buck made a point of acquainting himself with others, and

others with himself. In addition to serving as Class Historian, he was also a member of the Class Committee, and was active in the Dialectic Society, appearing in the Hundred Night shows.

Actually, little changed in the remainder of his service at the Academy. Second Class year gave him the opportunity to direct others within his squad, and so impart to them some of his creed of life, while First Class year enabled him to expand his sphere of influence.

Sure, the stories of his activities grew. Who else had attributed the end of a lecture to lack of a speaker’s drinking water? Who else commanded an audience after taps for the purpose of the

reminiscences of old “war stories”? Who else could command attention (both adulatory and grimacing) by his mere entrance into a room by an unforgettably theatrical appearance? Who else

had his anecdotes and sayings repeated over and over again with the familiar footnote, ‘‘Did you hear what Buck said?” And who was as well known as Buck for being himself? Undoubtedly, many of the above questions could apply to others of the Corps, and rightly so. But I doubt if any one person could satisfy all the requirements of such a litany as well as Buck. Yet, in the naturally maudlin remembrance of a fallen comrade, one can not omit the often hidden but ever-present quality of concern that Buck had for others. I do not mean to say it was for everybody, because Buck was selective. But I, and I emphasize the first person, believe that his one goal, as aspired to by Buck, carries with it a deep desire to see others happy. Odd as it may seem, the joy of others was one of Buck’s most sincere feelings of accomplishment. Whether he was admired or derided is known only by the person with whom Buck was communicating. It is just too personal to be covered by a blanket statement.

While at the Academy, Buck met Fran Urstadt, a graduate of Ladycliff College. They were married June Week in the Cadet Chapel. He was assigned to Fort Bragg, North Carolina, with the 325th Infantry of the 82d Airborne Division. A son, Richard William II, was born on 12 May 1967. Three weeks later Buck left for Vietnam. He was one of 99 classmates to volunteer for duty in Vietnam.

In June of 1967, Buck arrived in Vietnam. Buck distinguished himself on 19 November 1967, while serving as a platoon leader with Company C, 2d Battalion (Airborne), 503d Infantry, 173d Airborne Brigade (Separate) on a search and destroy mission in the Republic of Vietnam. As the lead element established contact with the well prepared enemy fortifications, Lieutenant Thompson maneuvered his platoon into an assault fine and pushed toward the positions. With little regard for his personal safety, he continually exposed himself to intense automatic weapons, rockets, and mortar fire to direct fires and to guide his elements. After receiving the order to withdraw, he began a retrograde action, utilizing fire and movement tactics that minimized the amount of casualties sustained. While reorganizing his platoon, he was ordered to assault the enemy again. As he moved his platoon

into an assault formation, he was severely wounded by small arms fire. Refusing medical attention, he continued to direct his element forward. In the vicious, close quarter firelight that ensued, Buck

was again wounded. He again refused any medical attention and continued to expose himself to the intense enemy fire. Running from man to man, shouting words of encouragement and direction, he inspired his troops with his valorous actions. As the order to withdraw was issued, he began to move his element away from the point of contact. As his platoon was moving into the company perimeter, Buck was informed that his platoon sergeant

was wounded and not with the platoon. With total disregard for his own safety and despite the fact that he had been twice wounded, Buck rushed back to the contact area which was still receiving

enemy mortar fire and dragged his platoon sergeant back to safety. While in the process of reconsolidating his position, Buck was mortally wounded. Buck’s extraordinary personal valor in

close combat against a numerically superior North Vietnamese force was in keeping with the highest traditions of the military service and reflects great credit upon himself, his unit, and the United States Army.

So, Buck lived, and died. That is it. He lived as he thought a man should live, and died as he thought a soldier should die. Buck achieved many personal goals, and he’d like to be remembered that way—as a winner, not as a failure. Hopefully, all who knew him remember the successes. I do. For he did achieve one magnificent success, for if you ever knew him, you will remember Buck.

Besides his wife and son. Buck is survived by his parents, Mr. and Mrs. J. H. Thompson of Atchison; a sister, Mrs. Paul Wilson, wife of Marine Major Wilson; and three brothers, Thomas K., Cass, and Jim.

Buck has been posthumously awarded the Silver Star, the Purple Heart, and several service medals.