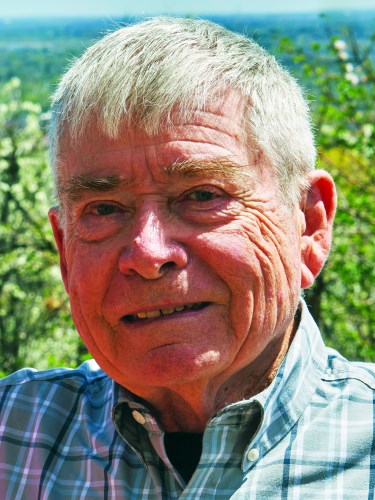 Thomas James Kelly, age 84, passed away peacefully surrounded by family, at home, in the Prairie Gate community. He lived in Council Bluffs for 49 years. Tom was born in Mankato, Minn., on July 25, 1938, to James J. Kelly and Clara Francis (Rose) Kelly, the first of four sons. He graduated from Comfrey high school in 1956 and immediately began work as an installer for Western Electric in Minneapolis, Minn. In 1959, he began attending college at the University of Minnesota, Duluth graduating with a Bachelor of Arts in 1963. That fall he reported for United States Marine Corps Officer training at Quantico, Va., with commissioning the following June. He and his wife Marilyn were married in 1964 and moved to Santa Ana, Calif., where he became an Avionics Officer for the “Flying Tigers” HMM361, a squadron of 24 helicopters and 36 pilots. He was deployed in 1965-66 to the DaNang and Marble Mountain bases in Vietnam on the South China Sea. Tom returned to Western Electric upon finishing his Marine Corps service in 1968, working in Salt Lake City and then as buyer for the Minneapolis Service Center. In 1973, he accepted a transfer to the newly opening Underwood, Iowa Materiel Management Center, and the family relocated to Council Bluffs. Tom took early retirement in 1989 during the restructuring of the Bell System in order to stay in Iowa. Tom enjoyed celebrating holidays with the Bryant, McGill, Schott and Silvius families, hunting pheasant with Don Silvius, fishing with the Laurence and McElderry troupe, in the Black Hills, and catching walleye with his mother and brothers at Red Lake, in Minn., every summer. He and son Mark were avid adventurers with Boy Scout Troop 249, camping at Little Sioux, Cedars, and mountain climbing at Philmont Scout Ranch, in N.M., with leaders Rich Wilson, Ernie Techau and Tom Miller. The entire family, Tom, Marilyn, Maureen, Mark and Aileen, vacationed every summer with canoe and tent in the Boundary Waters Canoe Area. He enjoyed trips to Disneyland and Alaska with his treasured grandchildren and wife of 58 years. Those close to Tom regard him as an incredible listener, loyal companion, voracious reader and the guy who could fix anything. Whether tinkering with his 1928 Model A Cabriolet or his fleet of Volvos out in Rolling Hills, riding his bike on the trails of Iowa and Colorado, or tending bees and extracting honey, he always found a quiet joy in each day. He was a steadfast and devoted member of the Council Bluffs community. He led a crew in the construction of the original Lake Manawa Dream Playground. He was a life member of the Council Bluffs Fish and Game Club. Tom is preceded in death by his parents; and brother, David, of San Diego, Calif. He is survived by his brother, Jerry and his wife Cathy, of Babbitt, Minn. and Yuma, Ariz.; brother, Steve and his wife Sherry, of Henderson, Nev.; brothers-in-law, Bill Strand and his wife Nancy, of Edmonton, Alberta, and Bob Strand and his wife Janet, of Beaver Bay, Minn.; sisters-in-law, Janice Bridge and her husband Adam, of Davis, Calif., and Sharon Strand, of Duluth, Minn.; two cousins, Mary Lou Warmka and Marcia Stewart; and seventeen nieces and nephews. He is also survived by wife, Marilyn; daughter, Maureen Kelly Moseman and her husband Neil, and their sons, Jack and Thomas, of Omaha, Neb.; son Mark, of Omaha; daughter, Aileen Kelly Schwab and her husband Charles, and their children Grace, Katherine and Joseph, of Boulder, Colo. Tom was a man of abiding faith, serving Mass as a young boy in Hill City and Comfrey, Minn., and attending field Mass in Vietnam while armed and dressed for combat. He served on the parish council finance committee at Queen of Apostles, culminating in the construction of the rectory and the re-roofing of the church. He also volunteered to lead RCIA and supported Micah House. Visitation for family and friends will be 9 to 11 a.m., Friday, Sept 16th, at St. Patrick’s Church, 4 Valley View Drive, Council Bluffs. The funeral Mass commences at 11 a.m., followed by military honors and lunch in the church hall. Burial will be on the morning of Saturday, September 17th, at Calvary Cemetery, in Mankato, Minn. Memorials are preferred to the Council Bluffs Public Library, Habitat for Humanity, Micah House, St. Patrick’s Church, Alzheimer’s and Dementia Association or a charity of your choice.